Siblings Angie and Edward Liew rumbled like warriors through the 2016 Nexus International School Triathlon at Putrajaya recently. They had both joined the Tri-AMAteur Club which trains kids for triathlon, and this event proved to be their first judgement day.

Angie recounts her race at the Triathlon consisting of a 200m swim, 8km bike and 2km run in the Under 15 age-group.

The world around me swirled as I pushed off into the water. I didn’t dare to look to my side, and I strained my arms to move faster through the icy pool. Halfway through the swim, I could already feel the numbness creeping up my legs.

I knew that I had to move faster, and yet I just couldn’t do it. Panicking, I forced myself to pull faster, as told myself to stay calm. After all, I’ve done so many 200m swims in training. What was the difference now?

Coming up from the pool, I tried to make up for lost time. Into transition, I quickly grabbed my helmet, racebelt, shoes and grabbed my bike off the stand.

My legs were aching from the swimming, and slightly numb but I forced them to move. Jogged briskly with my bike before I hopped on and sped off, hoping to overtake a few of my rivals just ahead of me.

I dashed down the short slope, building momentum for the long uphill just outside the school. I recalled the entire route from the day before, as I had checked it out together with my friends from the club that I had quite recently joined, Tri-AMAteur Club. I planned out my pace, as I swiftly overtook the girl in front of me.

8km sounds easy, compared to my long distance cycle trainings, but let me warn you: during a race, everything changes.

I felt dizzy, my legs were sore, my muscles were tensed. But I knew that all valuable victories come at a cost. I’d have to push through all of this.

The welcoming gates of the school soon called out my name, as I proceeded into my run after a quick transition. My footsteps echoed against the tunnel, as I clambered up the hill. Running was my advantage. I wanted to make my parents proud and show them that I could finish this 2km race strong.

I raised my pace slightly, but was disappointed to see a friend pass me from the opposite direction. She was already on the way back, and I hadn’t even reached the halfway point! 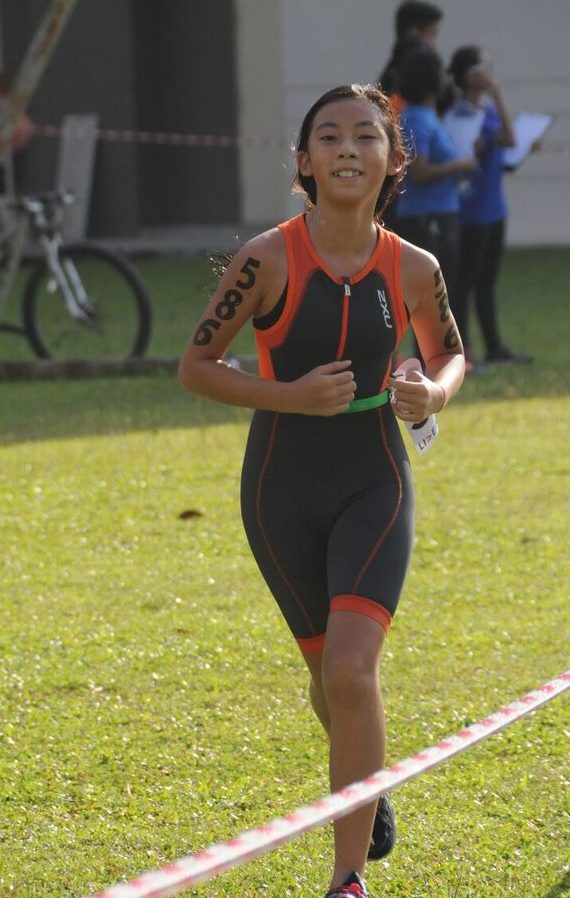 After the water station and turning point, I dashed off and I’m still unsure of how it happened, but I had caught up with that friend! I felt a burst of energy as I overtook her as swiftly as a cheetah.

I sprinted with all my might. Stride after stride, over the grass, I was getting closer to the finish line, right there in all of its glory. Victory, pride, and adrenaline rushed through me. I had done it again!

Happiness overwhelmed me, as I hugged my family and was so relieved to complete the Nexus Triathlon 2016!

Many often ask me: How do I do it? Well, my reply is always simple: I am a triathlete!

Younger brother 10 year-old Edward in turn, took part in his fourth triathlon event. In the Under 12 age-group,  he started off nervously but showed great determination in completing the 150m swim, 4km bike and 1.5km run.

I was very nervous and had to go to the toilet many times. Then I tried to take my mind off the pressure and played at the park until they started calling the Under 12 boys. We were supposed to be split up into waves for the start, but everything was jumbled up, and the pros were with the less experienced ones and that made everything slow.

After a while, my wave started and my heart pushed against my chest as I plunged into the pool.

Unfortunately, my pants were loose and started slipping off, so I had to keep pulling it up with one hand while the other hand pull to swim!

Transition could not come soon enough, and I jumped on my bike and started pedalling furiously.

On a straight road, I put my hands at the top part of the brake and crouched down to increase my speed. More aerodynamic, just like the pros!

I had to pedal slowly several times behind some slower participants because it was a narrow road and cars were coming from the opposite side. Nearing the school, I managed to overtake a slower pace boy as the road widened up.

Back in transition and into the run, I kept on running without stopping and collected 4 bands before going to the finishing line. The famous Triathlon Coach, Sue Teoh was handing out the band.

Soon enough, I started sprinting until the finish line where I collapsed tiredly but I was satisfied with my achievement today, and already eagerly for the next triathlon.

I thank the organiser LiveMore Events for organizing this event as the experience will take me one-step closer to my dream of being a professional triathlete. 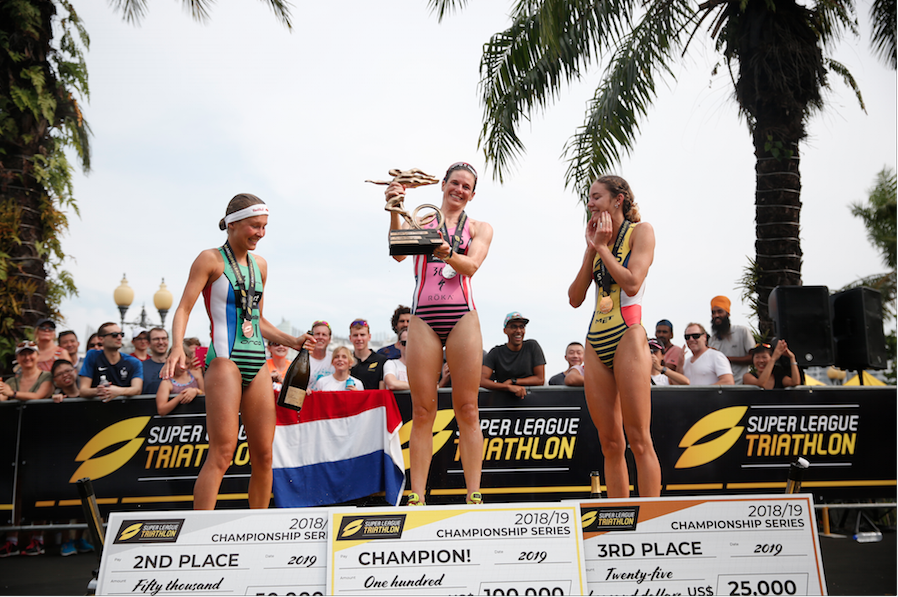 [Video] Katie Zaferes: “I am strong” 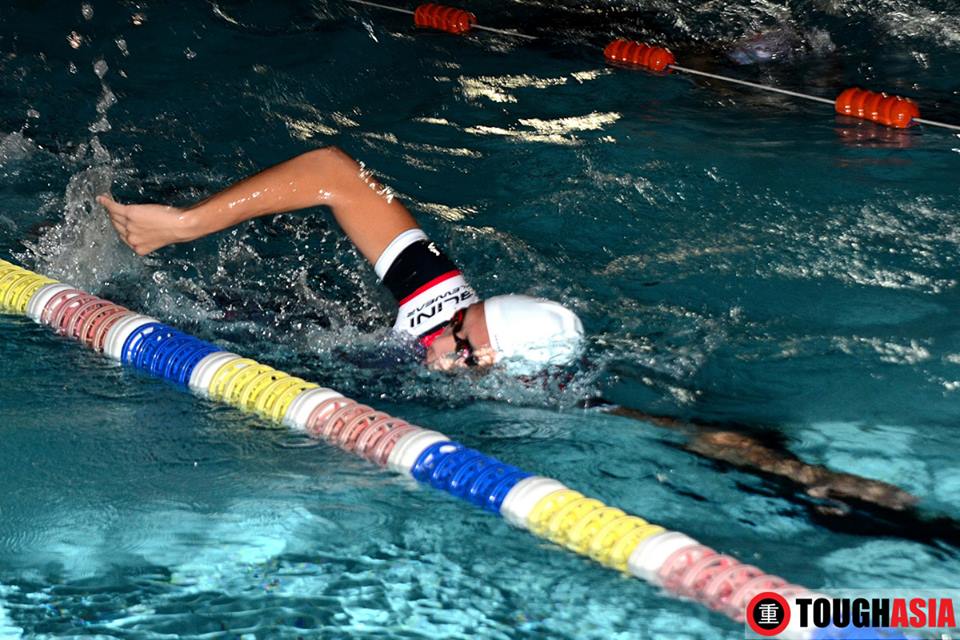 Tips to improve your sprint distance Swim in Triathlon 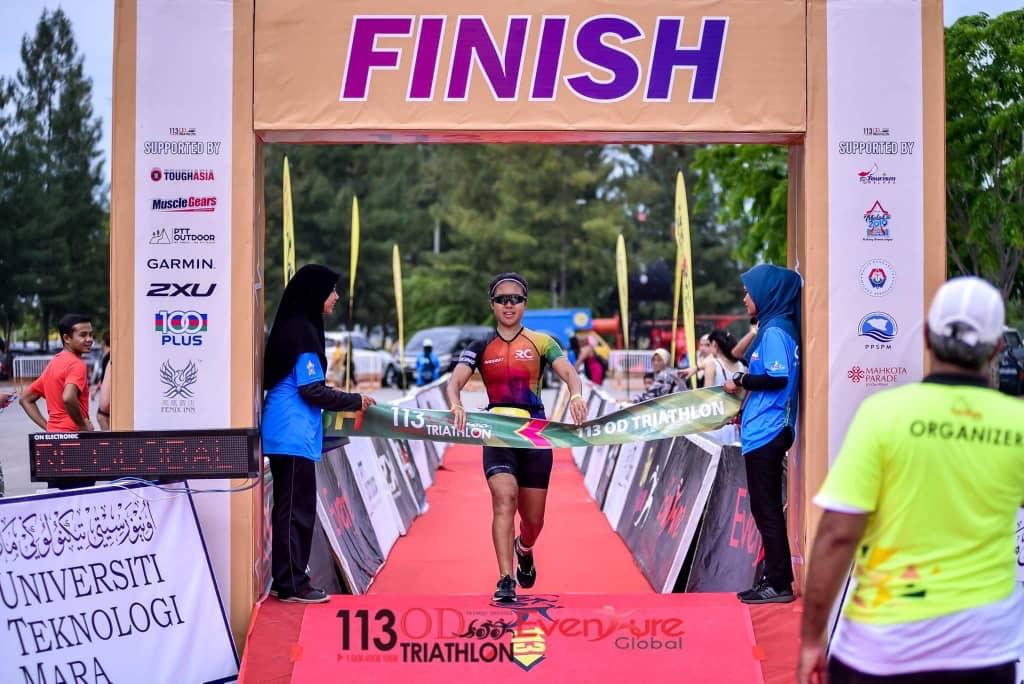 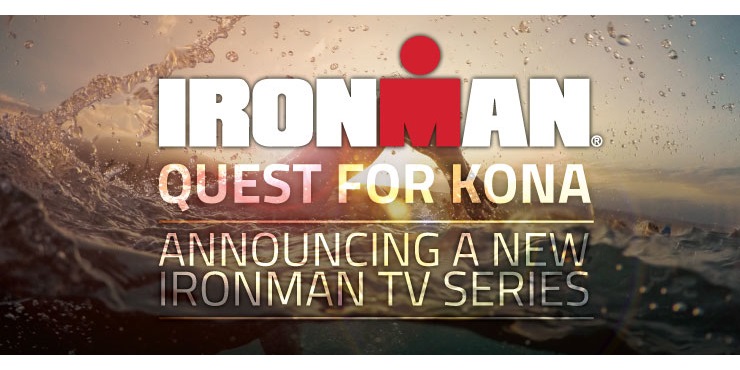