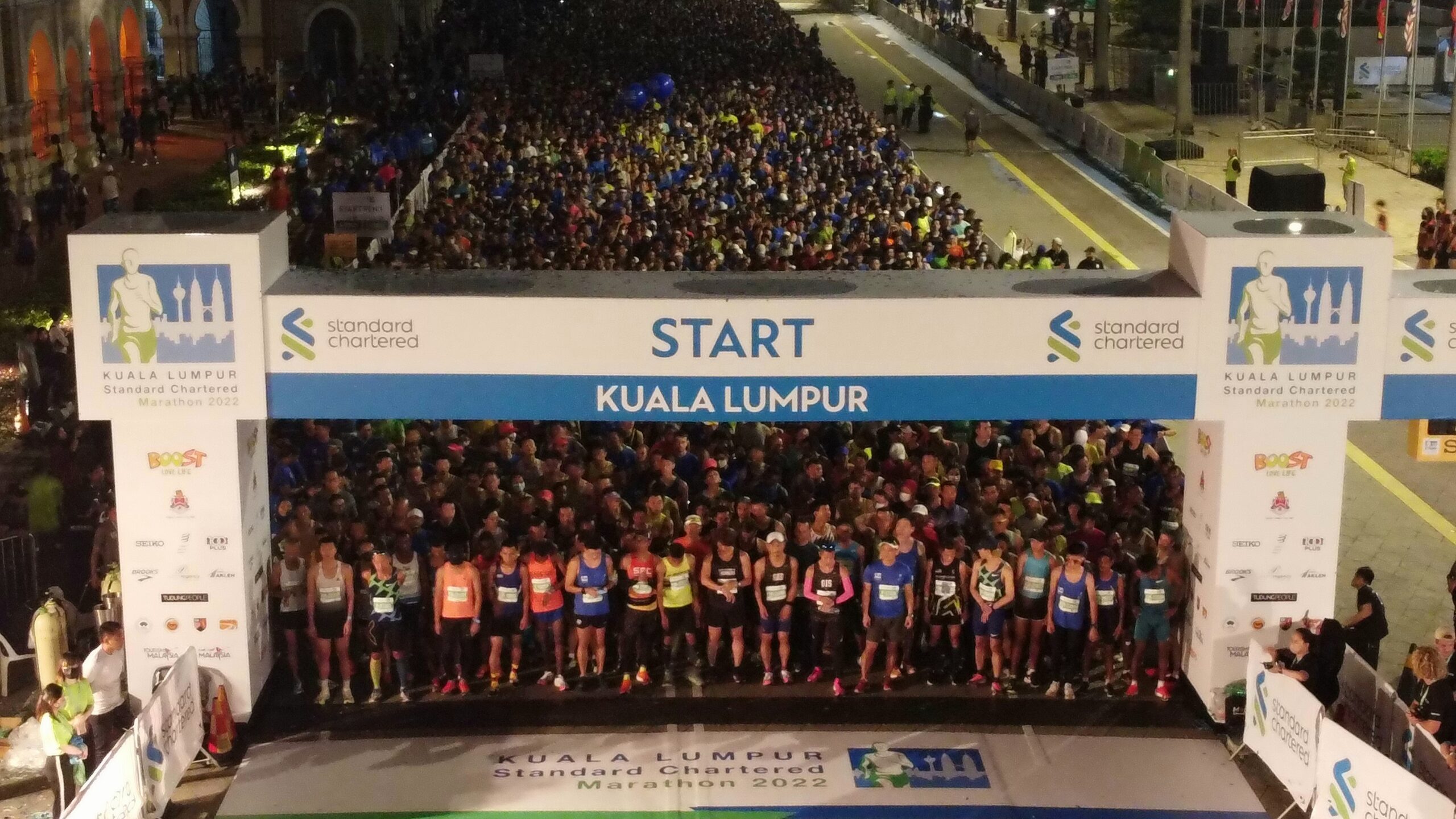 More than 34,000 runners converged on Dataran Merdeka last weekend to take part in the Kuala Lumpur Standard Chartered Marathon (KLSCM) 2022. The 12th edition of the premier distance running event in the country made a triumphant return after a two-year hiatus due to the pandemic.

The event saw the Full Marathon course record smashed by Moses Kiptoo Kurgat from Kenya in a time of 02:11:04, breaking the previous mark by more than three minutes.

Moses said “I was concerned about the humidity at first but I managed to finish strongly and I was pleasantly surprised to also break the KLSCM Full Marathon course record in my first attempt.” The Full Marathon Women’s Open was won by another first-time KLSCM participant from Kenya, when Shelmith Nyawira Muriuki won the race in a time of 2:44:16. Both Kenyans took home USD17,500 each.

The event, now held over two days, saw the 5km and Boost Juice 10km categories take place on Saturday and the Half and Full Marathon categories were held on Sunday. This is the first time that the 10km category was held on the first day of the event, which allowed all participants the privilege of starting and ending their race under the KLSCM Arch at Dataran Merdeka. Previously, the 5km and 10km categories were flagged of at SOGO Department Store in Jalan Tuanku Abdul Rahman when it used to be a one-day event.

The Full Marathon Malaysian Men’s category was a keenly contested affair as five-time KLSCM champion Muhaizar Mohamad and young upstart Poo Vasanthan went neck and neck for most of the race.

Muhaizar unfortunately failed to defend his title for the sixth consecutive time as Poo raced into a lead towards the end to bag his first KLSCM Full Marathon Malaysian Men’s title.

Rainer Biemans, Project Director of KLSCM and Director of Dirigo Events, said “The 12th edition of KLSCM has been a long time coming and we’re delighted that we’ve managed to pull it off without any major hitches. There were some great competitions in our blue ribbon categories, which augurs well for the continued development of distance running in Malaysia and a great barometer of the running community’s interest and passion for KLSCM”.

“We redesigned the course this year to freshen it up and potentially make it faster so we’re absolutely thrilled that Moses managed to break the course record in the Full Marathon category,” he continued.

“It’s been a fantastic two days and I would like to congratulate all who contributed to the success of the event and runners who participated and achieved their goals. KLSCM has always had tremendous potential to galvanise the running public into taking up a healthy pursuit and being the title sponsor for the 12th year, we are pleased to be a part of this event and to contribute towards the wellbeing of our communities, staying true to our promise of being here for good,” Mak said.

In line with Standard Chartered’s efforts in promoting diversity and inclusion, the Bank hosted two groups of community runners in the 5km fun run category. Aligned to the Bank’s support of the Purple Tuesday movement, the first group consists of 33 differently-abled participants including eight bank staff and 25 students and teachers from Sekolah Menengah Kebangsaan Pendidikan Khas, Setapak. The second group consist of 29 Goal runners from the Bank’s Goal programme that aims to empower and equip adolescent girls with the confidence to become future integral leaders.

The community element is a significant factor at KLSCM where funds are raised through its CSR programme Run For A Reason (RFAR), to aid deserving organisations. Every year between four and five organisations are selected for runners to raise funds for and this year, the shortlisted charities are Standard Chartered’s Futuremakers, Dignity for Children Foundation, the National Cancer Society of Malaysia, Hospis Malaysia and Teach for Malaysia. “Dealing with the pandemic over the last two years has been tough for everyone, and particularly so for those relying on the charity of others, so we’re happy to be able to reinstitute our RFAR programme and help to contribute what we can,” said Biemans.

Over 1,600 foreign runners from 47 different countries participated in the event, which meant more than 70 nationalities when local foreign residents were taken into account. There were also close to 10,000 runners who came from other parts of Malaysia, making it a particularly busy weekend for Kuala Lumpur.

At the end of the event, a relatively new tradition that began with the 10th Anniversary celebrations of KLSCM in 2018, saw runners, officials and others gathered at the Finish Line to cheer and provide moral support to the last runners to finish within the check-out time of 7:15 hours. In a heartwarming and inspirational show of support, these runners who had given their all to finish the race were given a celebratory finish, complete with confetti blasts to help push them over the finish line within the required time.

The Kuala Lumpur Standard Chartered Marathon has grown year-on-year to become the most anticipated distance running event in Malaysia. The premier running event once again saw Standard Chartered Bank Malaysia returning as title sponsor, along with a host of returning and new sponsors, including Boost Juice, Seiko, Compressport, 100 Plus, TudungPeople, Pacific Regency, Brooks and AKLEH. The event is owned and organised by Dirigo Events with venue host Dewan Bandaraya Kuala Lumpur. 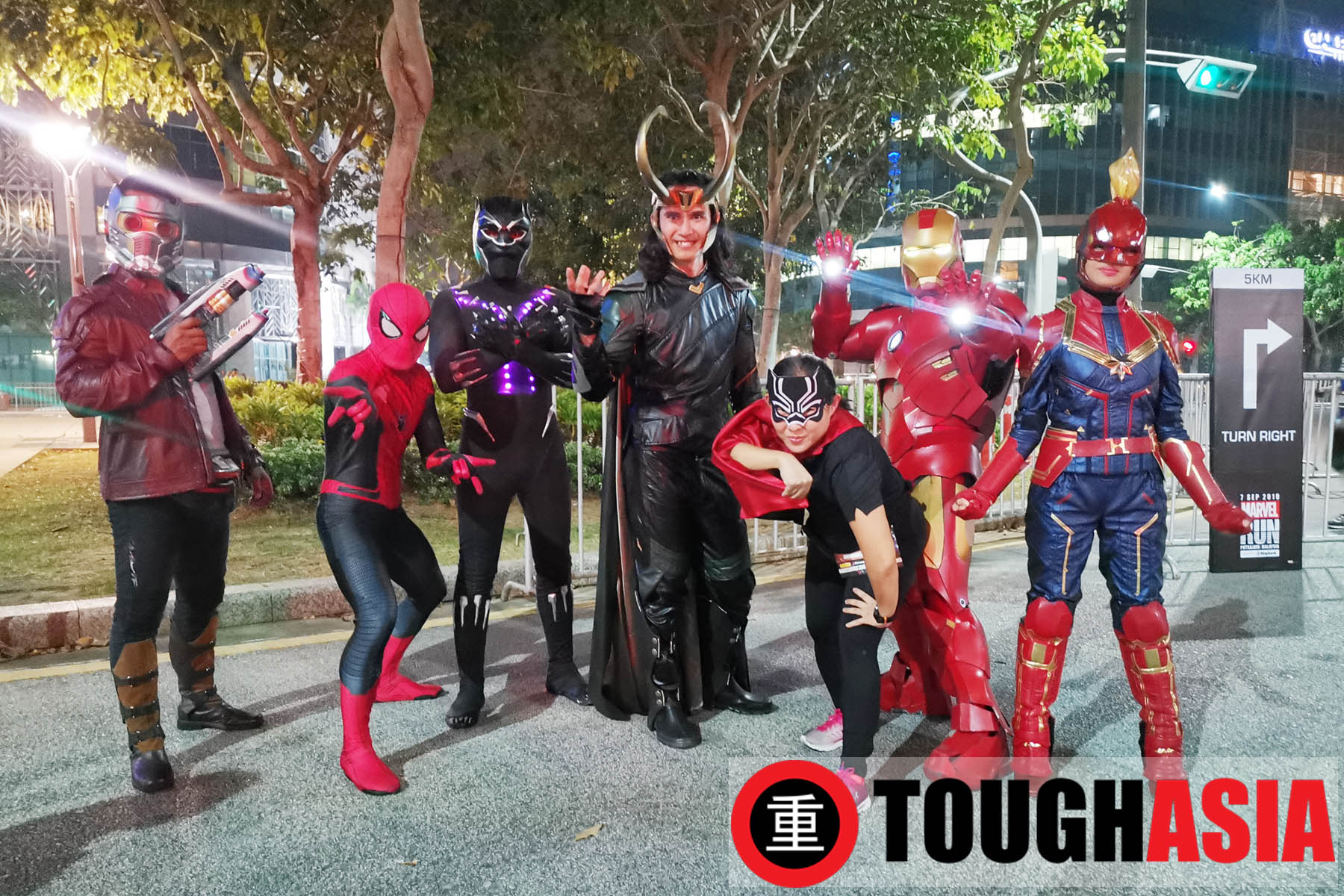 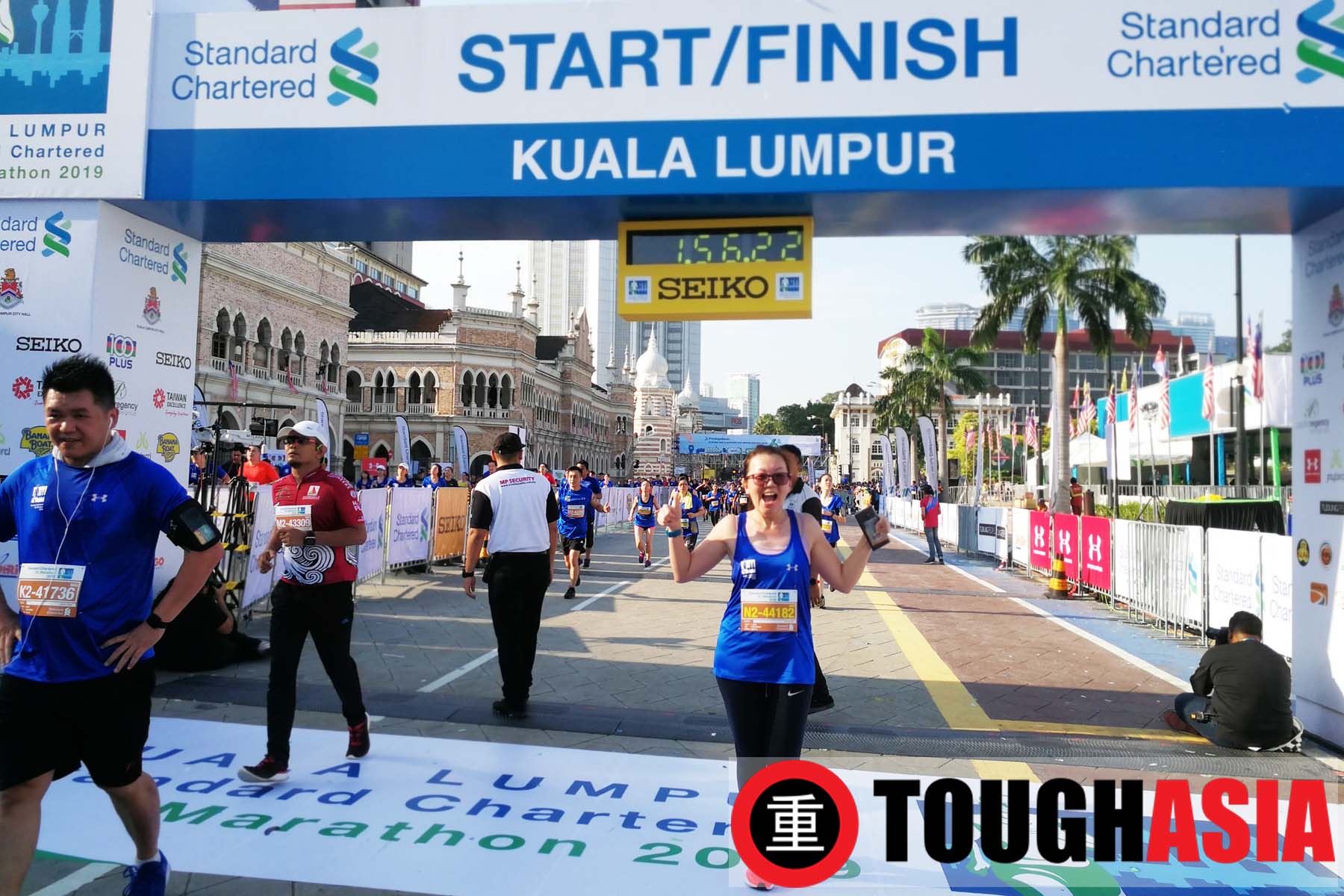 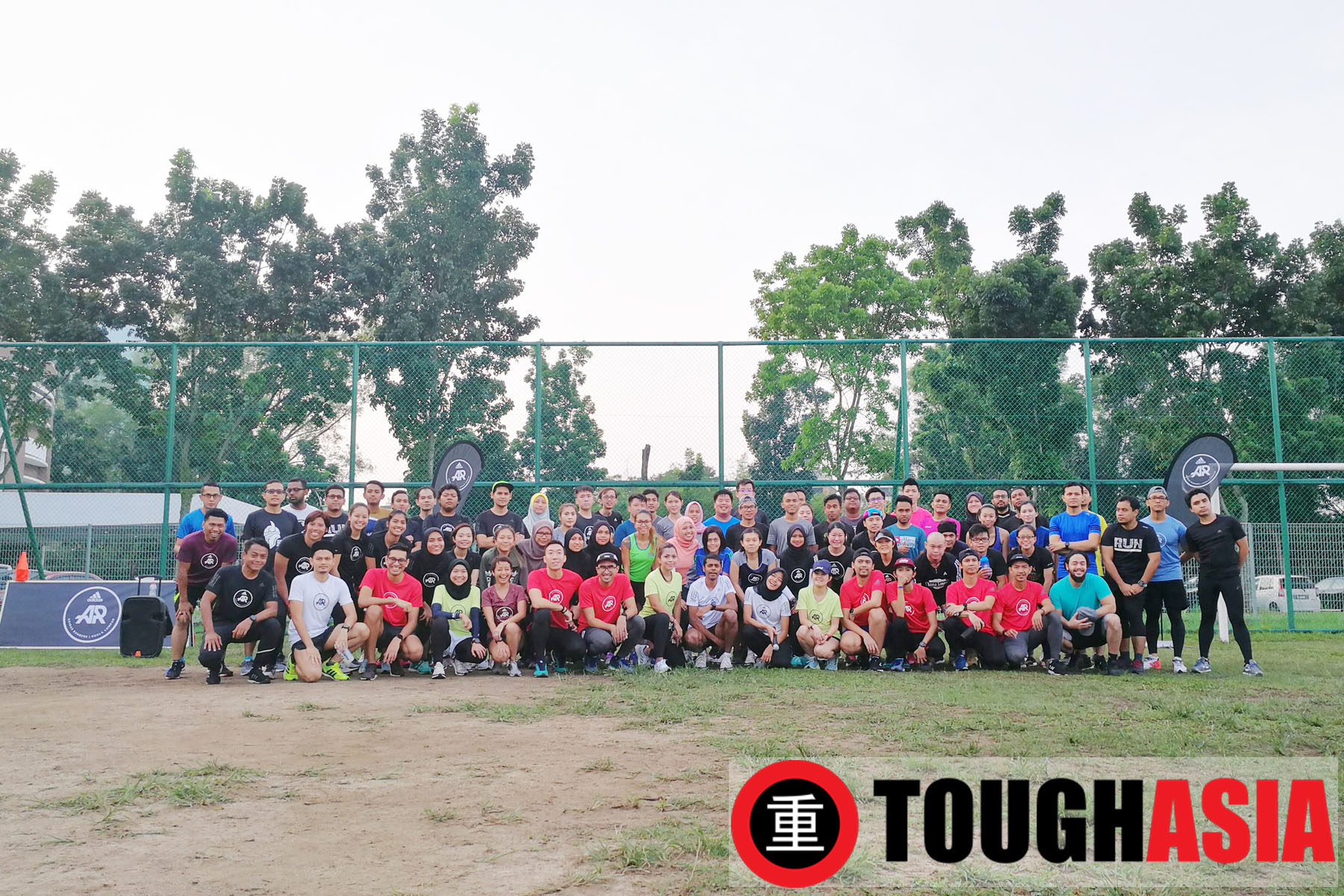 Break down those hills with Adidas Runners KL 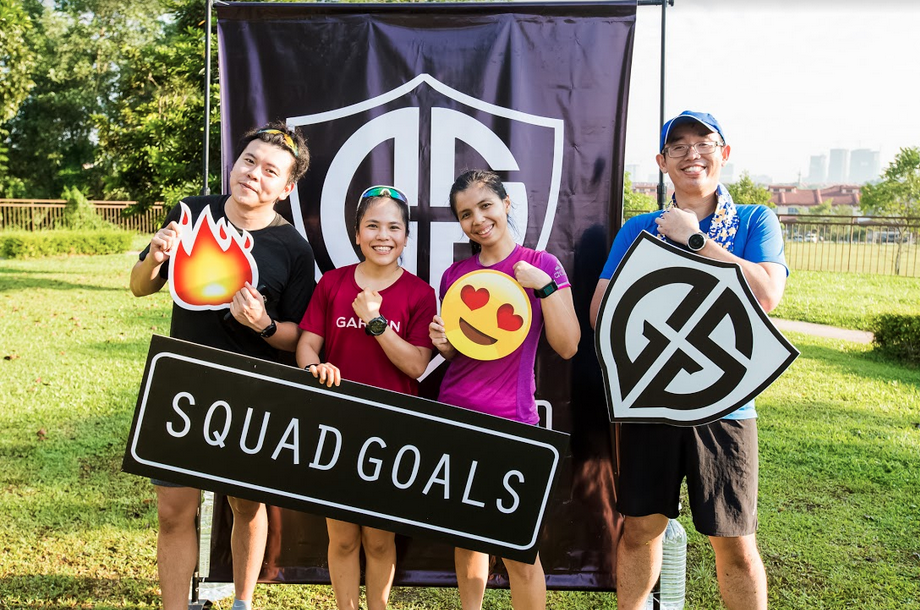