Cameron Highlands is a unique trail that offers beautiful scenery for the runners like no other.  Cameron Ultra Trail (CULTRA) has attracted runners from all over the world due to its challenging yet fascinating course profile.

CULTRArians can choose various distances – from the challenging 100km to the friendly 15km trail run. The route provides the runners with a mixture of breath-taking tea plantation scenery, a gruelling test of fitness in a low climate atmosphere.

Sports Minister, Datuk Seri Ahmad Faizal Azumu today announced that the new date for LTdL 2022 is from October 11-18 instead of June 11-18 as announced earlier.
The new date has been confirmed as listed in UCI Road Race calendar. Race stages remained unchanged. Stayed tune to get latest update from us.
======
MALAYSIA’s premier cycling tour race – Le Tour de Langkawi (LTdL) is set to return in June this year after being cancelled last year due to the Covid-19 outbreak. More than 20 teams including 18 from abroad are expected in the race this year.
The 26th edition of the UCI ProSeries status competition is scheduled to be held from June 11 to 18, with the route spanning 1,183 kilometers (km) involving eight stages around areas in Kuala Lumpur, Putrajaya, Negeri Sembilan, Pahang, Selangor, Perak, Penang, Kedah and Langkawi. 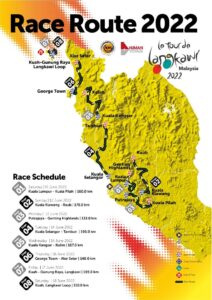